The first time I did The Puppy Dog Ride, I enjoyed it so much my recurring thought was that I should be sharing it with someone. “I should lead a ride down through here,” I kept thinking. “I should show others how amazing this is!” And so, when plans to tour northern Ontario with a couple of riding buddies fell through, I suggested we change the route to the beautiful dirt roads of Vermont.

Originally, the plan was to do a section of The Puppy Dog in Vermont and a section of The Hamster Ride in New Hampshire, working our way back toward the Canadian border. We also had plans to ride Bayley-Hazen, a military road that dates back to the American War of Independence. But we soon realized that our plans were a tad ambitious. Riding dirt all day in the heat of high summer is hard, so in the end we ended up doing sections of Puppy Dog with some asphalt mixed in to cool off and save time.

My riding buddies were Danny and Mike, whom I met at the 2018 Dirt Daze Rally in Lake Luzerne, NY. In truth, I only met Danny, who unfortunately had suffered an injury early in the weekend, as had my bike, so we were laid up together, so to speak. He and Mike had come down from Montreal, and while I never actually met Mike at the rally, the contact was made, and we ended up riding together later in the season.

I was happy to meet some off-roaders from the Montreal area. You shouldn’t really be riding off-road alone, partly because doing so is dangerous, but more importantly, because it’s a lot easier to lift your bike with the help of a buddy. Those who have been following my blog know about the trouble I’ve gotten myself into riding alone in remote areas. Mike works in the construction industry, so at the end of last July, during the constructor’s holiday, as it’s known here in Quebec, the three of us headed off for three nights of moto-camping in Vermont—Mike on his Honda Africa Twin, Danny on his new Triumph Scrambler 1200XE, and me, with half the power, on my BMW f650GS.

I had downloaded the GPS file for Bayley-Hazen into my phone and we picked it up soon after crossing the Canada-US border. We rode it for several kilometres and it was pretty amazing, but soon my GPS got confused and took us out to a highway. “This doesn’t look like an 18th-Century road,” I thought, so I pulled off to consult with the boys. My phone showed the snaking route for what we had just done, then suddenly a line straight as the crow flies to the destination. It was my first time using a GPS track downloaded from the internet, and I concluded that tracks only work in one direction. They are a series of turn-by-turn directions that take you from Point A to Point B but not Point B to Point A. And since the track I got was south to north, it didn’t work. If anyone knows a link to the north-south route of Bayley-Hazen, please drop me a line either in the comments section below or via the Contact page.

It was swelteringly hot—so hot that you really can’t stop moving—so a quick decision was made to abandon Bayley-Hazen and jump onto the Puppy Dog, which wasn’t far away. Soon we were back in the shade of those Vermont dirt roads. Now that we knew where we were going, we stopped for a break and to water the old growth trees lining the road. Danny noticed a vine as thick as a rope hanging from one of them. A little pruning off the end with a hatchet and we had a swing. 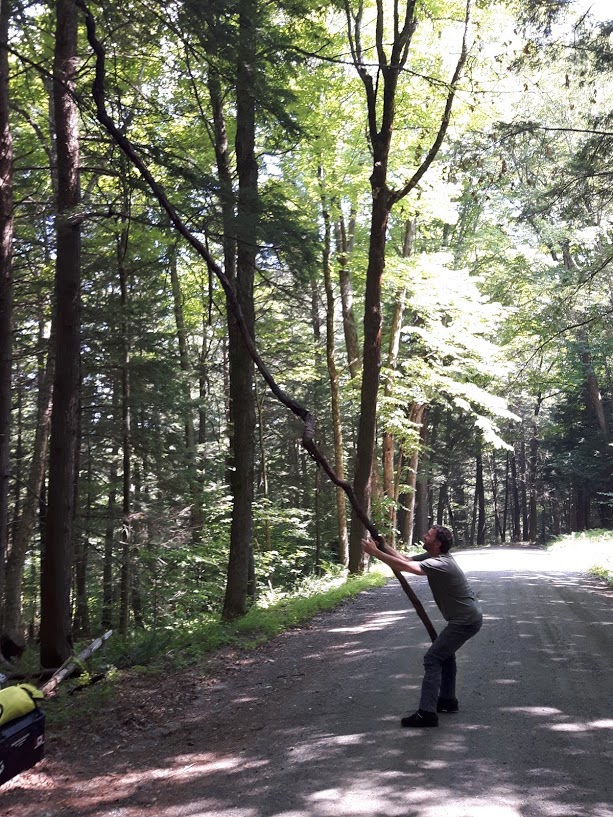 Boys will be boys.

I don’t have the premium version of WordPress that supports embedded videos, so go here to see how this turned out.

The ride is hard-parked dirt with a variety of forested rural roads, open valleys, switchbacks through dense forest, covered bridges, with some river and lake views as well. If that sounds pretty ideal, it is. You don’t really need an adventure bike to do this ride, but it helps. It’s nice to be able to stand up for some of the hill climbs, and there are some more technical sections that require the clearance of an ADV bike. But generally the ride is easy and undemanding. Danny and I rode it with 85/15 tires. 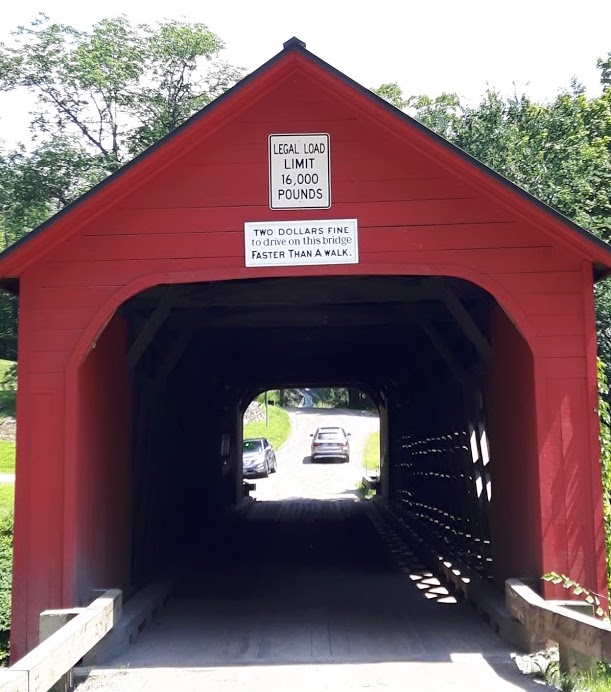 The PDR takes you through four covered bridges, including this one in Guilford.

We love Vermont’s state parks almost as much as its dirt roads. They are well maintained, and the sites have lots of privacy, as you can see from the photo below. They are also not expensive compared to what I’ve paid in Ontario. Despite all this, we didn’t have much trouble finding a site even without a reservation on the weekend. Either they are the best kept secret or Vermont has more campgrounds per capita than Ontario and Quebec. The second night we made it down to Fort Drummer State Park near the southern border of Vermont and near the end of the route. For our third night, we stayed at Silver Lake State Park, which is about halfway up the state in Barnard. As a bonus, it is located on . . . you guessed it, Silver Lake, and it’s nice to go for a swim after a hot day of riding.

Mike had said at outset that he likes general country stores, as do I, so as we passed one while riding Highway 100 in Weston, we pulled in. Little did we know what we were getting into. Walking into The Vermont Country Store is like walking into another century. This family-run business prides itself on stocking items dating back to when it first opened in 1946. Where else is checkers the game of the week and there’s a section labelled Apothecary? But the real fun is in the toy department. I saw games there that I did not think were still available, like Etch-a-Sketch, Kerplunk, Lite-Brite, and Operation. There were paddle-balls, which I had to try, and fail at, miserably, and Slinkys, and other hand toys too. The entire store is like a department store from the mid-20th-Century with clothing, candy, soaps, and “sundry items,” to borrow a phrase from that era. It was a blast from the past. I walked out with a “nightshirt,” a term I’ve only ever heard my dad say and Alistair Sim wear as Scrooge.

Another fun rest stop was in Chelsea, just north of Silver Lake on the PDR. Okay, it doesn’t have The Vermont Country Store but it does have Will’s General Store, where you can pet the cat sleeping on top the fridge, rent a movie on something called a DVD, buy marbles and firecrackers, and then set off said firecrackers outside until the locals start peering through their front windows at you. 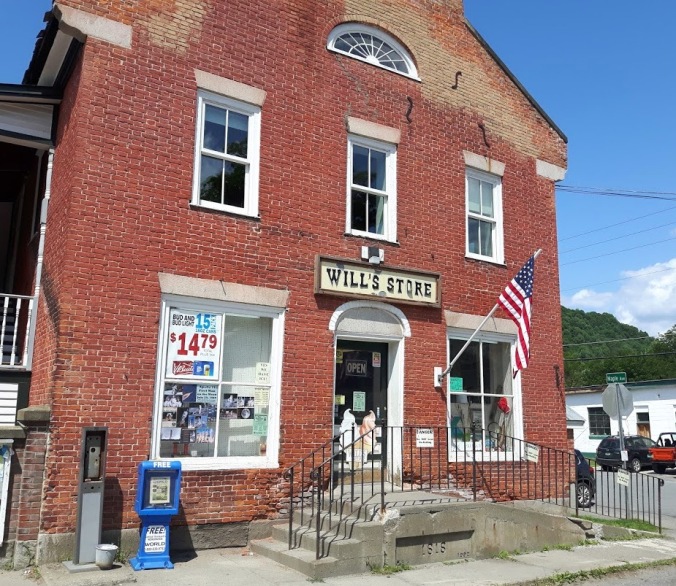 While we were disturbing the peace, another group of ADV riders came along. When they saw us they decided to take a break and introduce themselves. It turned out that they are Canadian too, from the Ottawa area, and were doing the PDR the other direction with the plan to complete it by the end of the day. And we thought we were being ambitious!

Lots of mighty KLRs in this group, and fellow blogger ADV Joe.

One of them flooded his KLR upon restarting, and while the motorcyclist’s code of honour is never to leave a motorcyclist stranded, we had to get going up toward the border; it was our last day and we wanted to get home before dark. He wasn’t alone, however, and Danny, who had a KLR for years, was confident that it would be running in no time. Those things are unbreakable. We decided, in the interests of time, to leave the PDR soon afterwards and ride up through Smuggler’s Notch, which is always nice and had been closed through the early season for maintenance.

Riding solo has its advantages, but so does group riding. The tricky part of group riding is finding the right fellow riders. You have to be compatible not only in riding but also in personality, which is not easy. Mike and Danny have been riding together for a while, so I was a little apprehensive going into this since I was the new kid on the block. There’s also that saying about two being company and three a crowd. Of course I can only speak for myself, but I think we are a good fit. I hope this is the first of many trips together.

View of the Green Mountains from the PDR south of Chelsea.

The PDR is luxury adventure touring. The riding provides a taste of dirt but is relatively easy. You are never far from amenities or asphalt, and can pop out anytime to refuel the bike or the body, or to cool off by riding Vermont’s equally enjoyable secondary highways and backroads. The campgrounds are great, and Americans are always friendly and helpful. The only thing it’s lacking is some more sustained technical terrain, and by the end of the weekend we were hankering for a rocky hill climb or water crossing. Perhaps next summer we will do that planned trip to northern Ontario or a section of The Trans-Canada Adventure Trail. With the mid-winter holiday over, it’s almost time to start planning for next season. 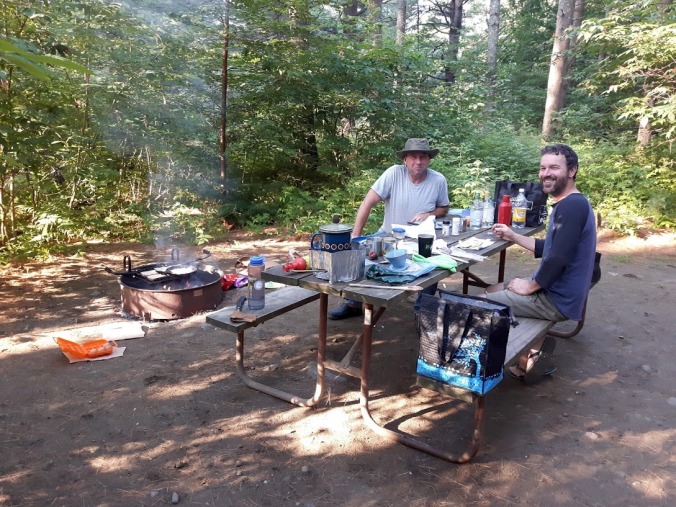