After riding the Cabot Trail, my plan was to stay in the area and explore a network of trails in the interior. My instructor, Emily, at S.M.A.R.T. Riding Adventures in Barrie had lived in Cape Breton for a few years and told me about them. Highland Road is a dirt road that joins the Cabot Trail near Wreck Cove and cuts across the island toward Cheticamp, opening up into a network of trails. There’s no one around for miles and there are no speed limits, little signage, and no asphalt. It’s an off-roader’s paradise.

But such riding should not be done alone. Fortunately, I spotted a 1200GS at the campground and struck up a conversation with the owner, Yannick. He is from Sherbrooke and was travelling with his wife and daughter with the bike in the back of their pick-up. It was a stroke of good luck! I don’t know whose second-language was worse but we managed. He decided to change his plans to ride the Cabot Trail that day in order to ride with me instead. His wife and daughter took a boat cruise in a tall-ship that was in port and Yannick and I headed off into the bush.

It took some sleuthing to find Highland Road and when we did, it was closed at the entrance due to some construction. Yannick used his Garmin Montana, an off-roading GPS that shows trails and topographical maps, to find a way around the construction and soon we were blasting along a gravel road . . . until we hit deep gravel. I almost lost the bike! We decided to stop and let air out of our tires. Looking up at the mountain before me and thinking of the recent near-accident, I have to admit, I was a little nervous about the riding ahead. But Yannick reminded me of a few basics that proved to be extremely helpful:

Once we headed off again, I immediately noticed a huge difference with the lower tire pressure. I no longer felt like I was riding on ball-bearings. The back end was squirmy, but the front held its line. I also found myself drawing on my training at S.M.A.R.T. earlier in the summer: peg-weighting to turn; squeeze the tank with your thighs; counterbalance on turns; feather the clutch (2 fingers) to regulate speed. But above all, I kept reminding myself of the rear braking lest muscle memory get the better of me.

By the time we made our first stop I was feeling more confident. Credit to Yannick for letting me go first and determine the pace. He took a lot of dust and stones for that! We discovered the reservoir for the area. There were some signs of warning, but thankfully everywhere was accessible. The network of trails was ours to explore. 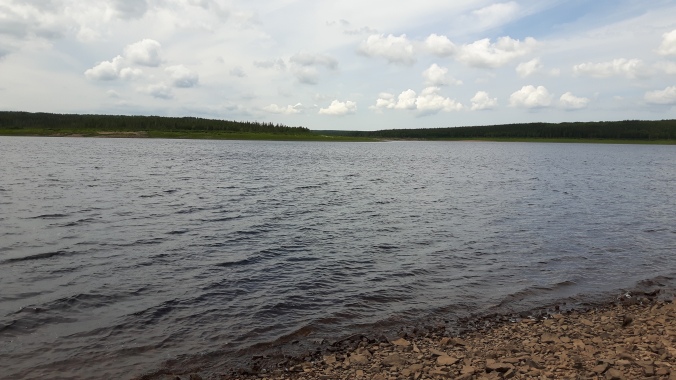 We decided to take a side road that we thought led back to the reservoir; we were looking for a nice lunch spot. But the road narrowed and narrowed, and got gnarlier and gnarlier, until it was a single-track ATV trail that challenged even our GS’s. I was going super slow over these huge rocks and bumps, feathering the clutch in first gear, but I still hit the skid plate several times on large rocks that jutted from the earth. It led to a rocky hill climb that took us to the precipice of a quarry. This is why the instructors at S.M.A.R.T. had said you coast to the top of a hill: you don’t know what’s on the other side. In this case, it was a 100-foot drop!

We had found our lunch spot and photo-op. 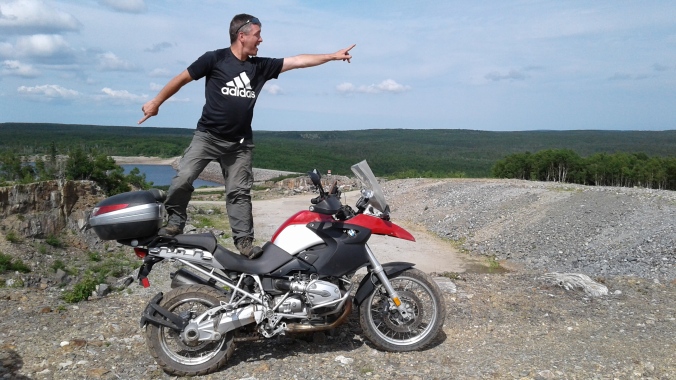 After lunch we had 37 kilometres of dirt road to cover to complete the loop back to the Cabot Trail. We were cruising at 80 km/hr but in the straights sometimes hit 100. The Metezler Tourances, which Yannick had too, were fine for this sort of riding. My confidence was growing but I reminded myself not to get over-confident and make a mistake. In some of the curves, at 60 km/hr., I swear the back end was sliding out. I was getting the hang of this! Then to make sure I didn’t get too cocky, Yannick blasted by me on his 1200GS, spitting stones and leaving me literally in his dust.

Still, I was doing what I’d been preparing to do for the past year and what had been my ultimate goal for this tour: off-roading in Cape Breton. The winter reading, the training with Jimmy Lewis at Dirt Daze, the full-day course with S.M.A.R.T., the practice at a local sand pit and, not insignificantly, the investment in off-road gear, all culminated in this day of off-roading. It was even more exciting than the Cabot Trail and I wrote that evening in my journal that this trip just gets better and better. 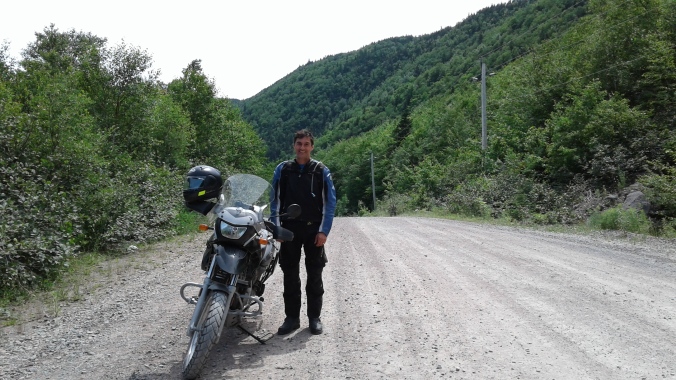 Next up, the Marine Drive to Peggy’s Cove.