It’s been over a month since my last post and only the third really this season. Yes, I’ve been a bit lazy lately as a writer but only because I’ve been hard-working as a rider. Ideally I like to write about my time on the bike as soon as possible afterwards, but this year a few commitments got in the way. One in fact was some writing for Ontario Tourism’s Ride the North website. I enjoyed that writing, but it’s for a different audience, and I had to do a lot of editing to shape it for that audience. I’ve been looking forward to writing a more extensive treatment of my travels here.

Readers who read my last post on trip planning know that this year I tried something different: my wife and I travelled together—she in the car, and me on the bike. We then separated and I had a short solo trip for another four nights. We decided to circle Georgian Bay counter-clockwise starting at North Bay, spending time on Manitoulin Island, which neither of us had visited before. Now you can take the 401 to Toronto and then head north on the 400 . . . if you are a sucker for pain and like sitting in stop-and-go traffic . . . or you can take the 417 into Ottawa where it turns into the 17 and takes you all the way to North Bay. I’d read about this route in Neil Peart’s book Ghostrider and knew immediately I wanted to do it. So at 10 o’clock—the time my wife and I always seem to depart on road trips, regardless of all other factors—we pulled out of the driveway and headed, of course, to Herb’s Travel Plaza. With a name like that you’d think it was from another century. Certainly the single-engine airplanes in various stages of disrepair and decay at the side of the “plaza” as decoration are. But its quirkiness is part of its charm. Herb’s is the best gas bar the other side of the Ontario border and our designated meeting spot should we get separated in traffic.

After both vehicles were filled we bombed through Ottawa and on to The Little Coffee Shop in Cobden for lunch. Now what do you do when you have packed a lunch but want to buy a coffee and a snack? Do you eat the sandwich in the restaurant with your coffee or eat it before going in, out of respect for the owner? This is always a dilemma for me. Once in Austria, I think it was, I was asked to leave a McDonald’s—a McDONALD’S! of all places, because I pulled out my prepared lunch while my friends ate their Big Macs. That was 30 years ago but the trauma remains today so I usually eat first. There were a few tables outside on the sidewalk and I thought sitting there, as opposed to in the cafe, would be a good compromise. I put my sandwich down and went inside to order, only once inside it was so casual and the owner, who serves behind the counter, so friendly I just asked and before she could answer she said I’d better go rescue my sandwich because a seagull was trying to get through the cellophane. That seemed to settle the matter.

I don’t remember much of the ride into North Bay except that it was hot and long and I was tired and later hungry and that’s probably why I don’t remember much. I was in that auto-pilot “just-get-me-there” mode. Our destination was Restoule Provincial Park, only because it was (suspiciously) the only park not completely booked when we did our planning. When you are camping in the Muskokas, you have to book your campsite six months in advance. Yes, six months! And not just the campground but the specific site! We heard stories during our trip of families strategically getting each family member on a separate computer at the same time, exactly six months prior to the desired date, because that is the earliest you can try, and everyone simultaneously trying to reserve a site. It’s like trying to get concert tickets to Led Zeppelin’s single reunion concert through Ticketmaster. I don’t know if I’m going to be alive six months from now so Restoule it would have to be.

By the time we arrived I had only one thing on my mind: dinner. But as luck would have it, the stove would not light. I’ve had this stove for about three years. I bought it when I bought the bike with moto-camping in mind. And I remember at the time I had a choice between the Optimus Nova+ or the MSR Dragonfly stoves. They are basically the same, or so the salesperson told me, using essentially the same design to burn a variety of liquid fuels (naphtha/white, kerosene, unleaded gas, diesel). 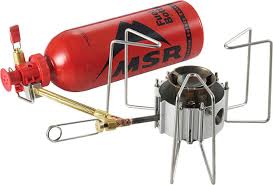 And looking at the two, you’d think they are pretty much the same. I bought the Optimus because it looked a little sturdier and packed up slightly smaller. I have to admit it was the wrong choice. Of all the gear I’ve bought for my camping, this stove is the only regrettable choice I’ve made. Aside from a stretch of 12 days during my tour last summer, this stove has acted up in a variety of ways. One repeated way is that the valve gets stuck closed. Then you have to twist the feeder line so much you’re sure it’s going to break until it gives and releases. This time it would not give so it broke instead, which is to say I had to use pliers to open it and stripped the internal brass threads in the process. In the meantime I missed the sunset that my wife was enjoying down at the beach.

Sunset on the beach at Restoule Provincial Park

I can’t remember what we had for dinner that night but my wife worked some magic from the food bag. Lying in the tent later, I used the last ounce of energy to search on my phone for an outdoor store in North Bay or Sudbury. It was the first night of a two-week camping trip and I didn’t have a functional stove. The adventure begins. 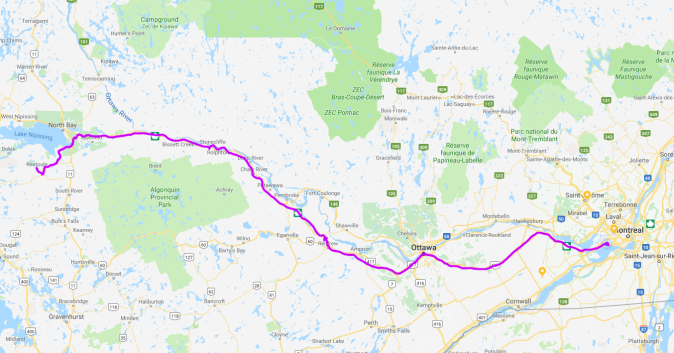