Do you remember when you learned how to ride? I do. It wasn’t that long ago. I remember there was a lot of nervous excitement. Mostly there were a lot of nerves. I remember how worried I was when all we had to do was roll out in first gear a few feet then stop using the rear brake. 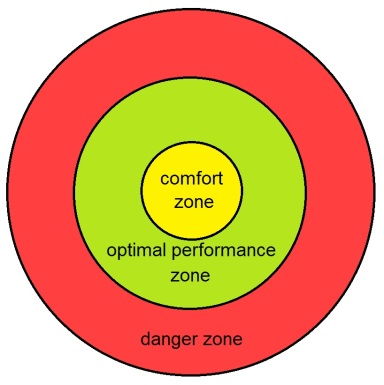 I don’t know what I thought might happen, but in a worst case scenario it was something like accidentally hitting the clutch instead of the brake, then popping the clutch, popping a wheelie, flipping the bike, and landing on my back, the bike crashing down on top of me to the laughter and applause of all the other students and even a few instructors. But that didn’t happen, and I survived. Then we had to actually ride in 1st gear [gasp!] in a circle, stopping at each of four cones, and that was outside my comfort zone. Eventually we were changing gears, counter-balancing, countering-steering, and emergency braking. Then we left the lot and headed onto the road. Then we went on the highway. Each time we completed a new exercise or ventured into unfamiliar territory our comfort zones expanded ever so little. Before we knew it, the course was over. Now what do you do?

Without the pressure of an outside source pushing you out of your comfort zone, you have to push yourself. For me this year that has meant developing off-road skills, and every time I pull on my Klim Dakar pants and Sidi boots (as opposed to my Dainese jeans and Tourmaster touring boots), I feel it in the pit of my gut: that nervous anxiety in anticipation of possible danger. I’ve been going over to a small undeveloped area near the airport; it’s a space only a few hundred feet across and contains a mixture of dirt, loose gravel, and sand. I warm up with some slow-speed stuff to develop balance, then set up a few cones and practice brakesliding and powersliding. There isn’t much chance of getting hurt doing this—not seriously—but I still get a little nervous while riding over. I’m heading out of my comfort zone.

What’s the worst that can happen there, seriously? I drop the bike, maybe damage it in some way, or get a foot caught under it when it falls. It’s all pretty low-speed stuff. But that doesn’t seem to matter. It’s the perception of danger that brings those feelings on, and that happens any time we are doing something new. Perhaps it’s evolutionary. Ever wonder why students always sit in the same spot every class, even if they come early and have so many more to choose from? The theory goes that we are animals and our first concern is survival. We sat in a particular spot last class and nothing bad happened to us; we’ll trust that spot again. Change, however innocuous, is scary.

This should be distinguished from real danger. I’m not suggesting pushing yourself into The Foolhardy Zone, when you ask yourself to do something well outside your skill set. The Comfort Zone is like a muscle: stretch it a little and you’re fine; stretch it too much and something bad is going to happen. The instructors at my school didn’t stick us on bikes after introductions and take us on the road. It was a slow, incremental development of skills from the most fundamental, like how to get on and off the bike, to what we needed to pass the closed circuit test.

I’m thinking of this now because, after having a fear of the water my entire life, I’ve decided to take a swim class and finally get over it. The class is Thursdays at noon and by Wednesday evening I’m already thinking of skipping the class. As I drive in Thursday morning I’m thinking of getting a mouthful of water mid-stroke and choking, gasping, suffocating, and as I walk in from the parking lot I feel like I’m walking to the gallows. I have to steel myself, psych myself up, reassure myself, promise myself it’s all worth it in the end. And on Tuesdays, when there is the free swim time, I have to push myself even harder without the commitment of a class to get over to the pool. So these past few weeks I have had very concrete awareness of the need to push myself out of my comfort zone. But so far I haven’t skipped a class and have gone to the free swim the past three weeks. Each time I enter the change room and smell that distinctive urinous chlorine smell, it gets a little easier. Just a little. Nothing bad happened to me last time.

The motorcycling, or any other skill, for that matter, can be a metaphor for life. It’s only outside your comfort zone that growth happens, and it’s up to each of us to push ourselves into uncomfortable situations. I remember a guy I knew years ago who admitted that, if he had the resources, he would stay inside his bedroom and live his entire life there! Apparently his comfort zone extended only as far as the bedroom door. (It’s not clear how he would meet women, but maybe that’s covered in the “resources” part of his fantasy.) I have a different fantasy: one in which I’m swimming laps, the kind of complete-body, zero impact training I’ve wanted to do for many years, and another where I’m powersliding out of a corner on a dirt road somewhere far from Montreal. There are others, one for each of my “hobbies,” and I use these to get me over to the pool, my sandbox, off the couch in the evenings and pounding the pavement. Instead of imagining the worst, I’m imagining the best, even if a part of me knows I might never get there. But if I never get close, I’m closer than if I never pushed myself at all.

Pursue your dreams; life is too short.