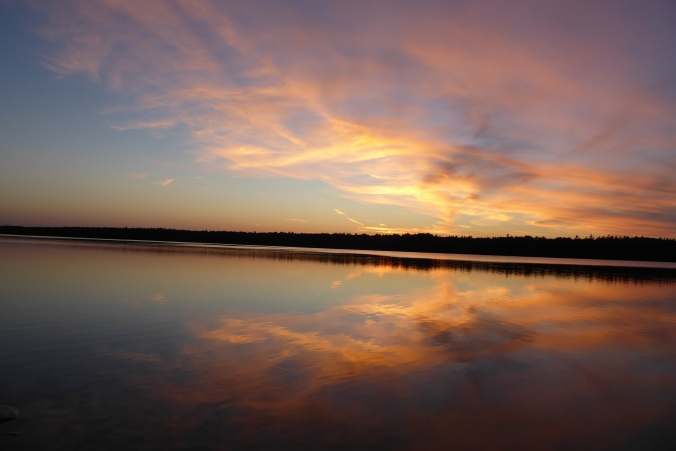 I grew up hearing of the Bruce Peninsula. My dad sometimes worked at the Bruce Nuclear Generating Station, and I had friends who either had cottages up there or would spend family vacations on its shores. But it would take me 55 years before I got up there, oddly enough. Like the Torontonian who’s never been up the CN Tower, I took this tourist attraction for granted and felt I had to travel to other climes for a sandy beach and clear water.

My wife and I disembarked the ferry at Tobermory and headed down to Bruce Peninsula National Park. As usual, my guardian angel had saved me the final campsite when I went to reserve a few weeks earlier. (I’m terrible at planning, but things seem to work out.) We had a great site a short walk to the water, but I was miffed that we had to pay an extra $11.50 for the bike. This is consistent with the provincial parks we also stayed at. One person in a car and one person on a bike should not be charged more than the family of twelve that spilled out of an SUV across from us. $11.50 isn’t much, but over a ten-day vacation, it adds up. Parks Canada needs to look at their pricing and come up with something that is more equitable, at least if they want to attract motorcycle tourism. Non-electrical sites like ours cost $23.50 per night, plus the $11.50 for the “additional vehicle,” plus an online reservation fee (mandatory for such a popular campground). It adds up to around $50—a little steep in my opinion for a patch of ground on which to pitch your tent. I get it: supply and demand; they charge what they can. However, not everything has to fit within a free market system, and call me naive, but the experience of camping and enjoying nature should not be a source of revenue for government coffers, our parks promoted as the national treasures they are. They should be maintained with tax dollars and users charged a nominal fee. Okay, I’ll step down from my soap-box now. 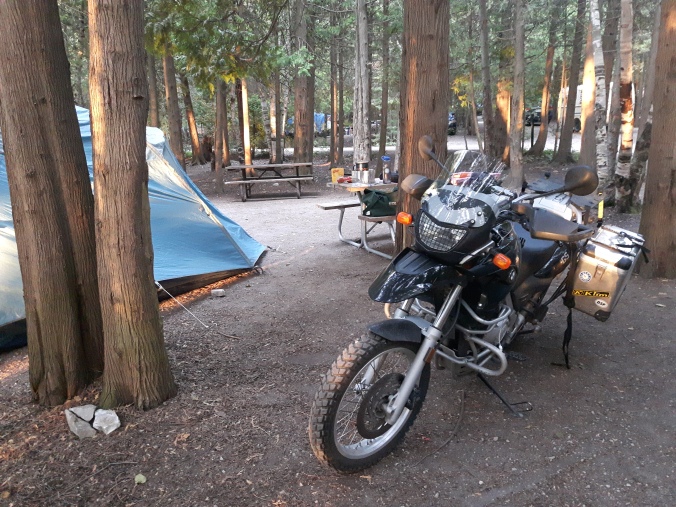 After we set up camp, we decided to head back into Tobermory because it looked pretty cool as we disembarked from the ferry. I had a hunch there’d be a microbrewery there and my gut rarely lets me down! 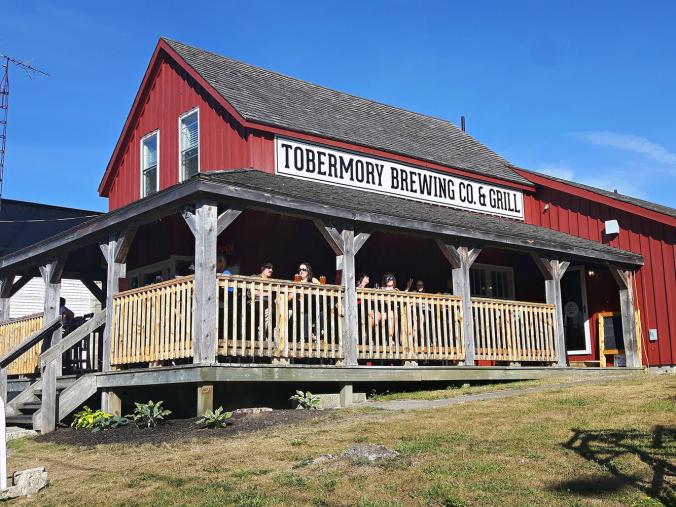 We sat on the terrace, as it’s called in Quebec, and I had a cherry porter, my wife, an amber lager. We struck up a conversation with a couple about our age at the next table. They lived the other side of the bay but had once lived in Montreal—that is, until the first referendum in 1980. Shortly thereafter, he was tasked with the job of moving the company to a place with “better conditions for investment,” as he diplomatically put it. It was interesting meeting people who had fled Quebec, so to speak, after the first referendum. I arrived in 1990 and heard of the exodus, but here were two people directly affected. I would have liked to ask them more about that experience, but hey, we were on vacation, and who wants to talk politics while on vacation, especially on a terrace overlooking a beautiful harbour while drinking exquisite beer on a hot summer day. 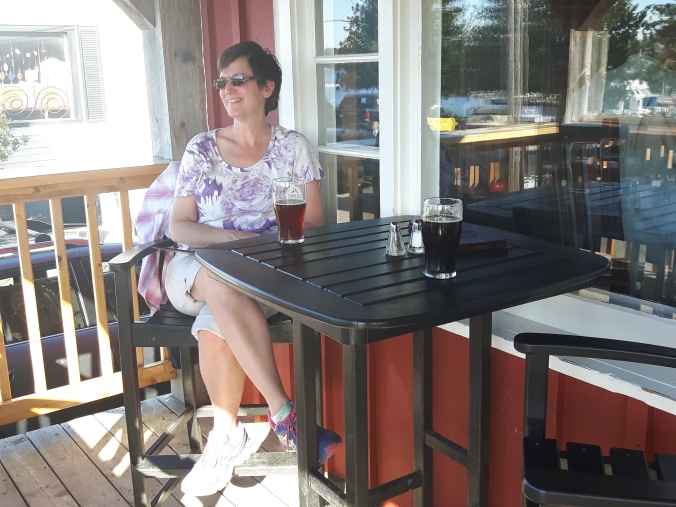 When we got back to camp, there was only enough time to cook and eat dinner and then wander down to the water for the sunset (see photo above).

The next day, we hiked out to The Grotto, a spectacular swimming location with clear emerald water. It’s a little cold—okay, a lot cold!—but like at Bridal Veil Falls, we forced ourselves in and were happy we did; the experience was exhilarating and the highlight of this segment of our trip. One of the benefits of Georgian Bay is that, unlike Lake Ontario and, sadly, many of the other Great Lakes, it isn’t polluted from industry. The water is so clear and pure that you can see shipwrecks lying on the bottom—not at The Grotto, but at Tobermory, the “shipwreck capital of Canada.” After, we climbed the trail up to Indian Head for a good view of the bay and The Grotto. Note that due to its popularity, parking for The Grotto is now by reservation only in four-hour time slots. If you camp at the park, you can access it by foot and, at around noon, have the place pretty much to yourself as one group leaves before the next arrives. But frankly, we didn’t mind the others there. It’s not overcrowded and some young’ns encouraged us into the frigid water. 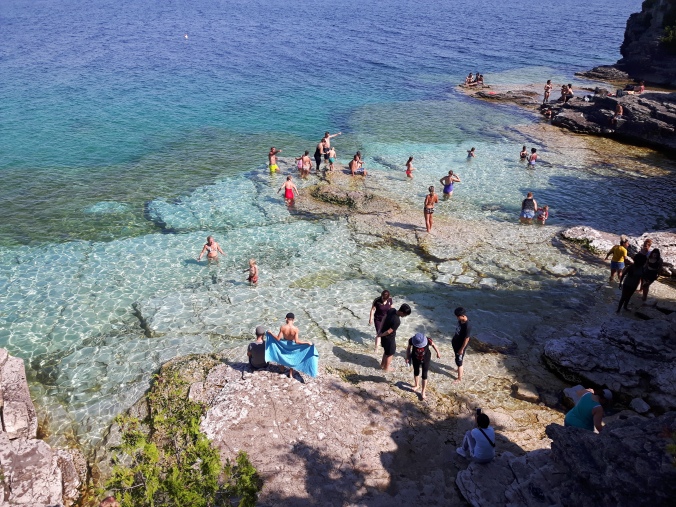 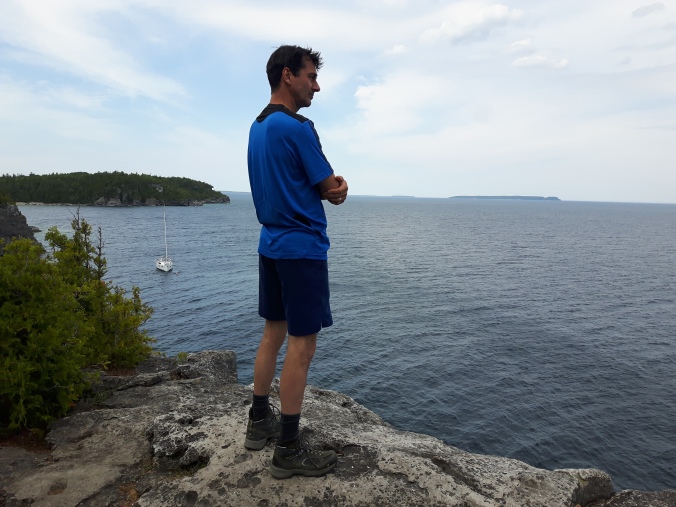 When we returned to camp, we discovered that our electric cooler had flattened the car battery. (Note to self: you can’t leave it plugged in when the car is turned off.) I was surprised that that little fan and compressor could flatten it in a few hours, but they did. I saw some people just pulling out of their site and asked for a boost. They obliged, and then there was nothing else to do but drive for an ice cream to charge the battery.

The next day we headed around the southern tip of Georgian Bay, taking the scenic Highway 1 from Wiarton to Owen Sound, then Highway 26 through The Blue Mountains, Collingwood, and Wasaga Beach—iconic vacation spots dotting the southern shoreline. Then it was up the east coast, heading into Bobby Orr territory, Parry Sound, where we stopped for dinner. The vibe now was very different from Manitoulin Island. Muskoka is a shortish drive from Toronto, whereas Manitoulin is separated by the ferry crossing. Consequently, where Manitoulin is quiet, remote, and humble, Muskoka is popular, developed, and privileged. We were tired and hungry so found a Boston Pizza, which is a safe if boring option. There was cruise ship in port across the harbour, and as we waited for our table, a family dressed to the 9’s crossed the street and got into a car. Once seated inside, we were surrounded by large-screen TVs showing sports, and I couldn’t help remembering a little wistfully the deck and picnic tables at Lake Huron Fish & Chips. There are some very nice smaller towns in Muskoka like Orillia, Severn Bridge, and Gravenhurst, but sadly the region seems to have lost the charm I once knew and to which The Group of Seven were drawn.

We were happy to get to our campground, Sturgeon Bay Provincial Park, just north of Parry Sound. While checking in, we were shown a rattlesnake that had just been caught by a staff member. It was in a 10 gallon pale and not a happy camper, so to speak, its tail red and rattling. It was an ominous start to our stay that was borne out at 2:00 a.m. by a loud party happening at a nearby campsite—the usual youngish folks talking and laughing loudly (i.e. drunkenly), as if they were not surrounded by tents filled with people trying to sleep. Yeah, I could have asked them to keep it down, but when alcohol is involved, I tend to avoid confrontation. We’d had a similar experience at Sandbanks Provincial Park, another Ontario campground, earlier in the summer and had learned to bring the office phone number into the tent with us. Unfortunately, when we phoned, it went to voice mail.

The next morning we spoke to staff upon leaving. They said that the night warden does a final round at 1:00 a.m. before she leaves for the night. If anything happens after that, she would not be aware of it. Was it a coincidence that the party got loud at 2:00 a.m.? Probably not. Unfortunately, some people use the Muskoka parks as their weekend playground to party without any regard for others who might be there to enjoy nature. Ironically, the Ontario Parks newsletter you receive upon registering is filled with rules and regulations and fines—page after page, in table format—but those regulations are not worth the cheap newspaper they’re printed on if they are not enforced. The staff were apologetic, but ineffectual.

The Sandbanks experience earlier was so bad that we considered leaving and trying to find a hotel in the middle of the night. We later applied for a refund, a process that involves sending away a form to Ottawa, but we haven’t heard back yet, and I don’t expect now we will. I did not write any of this in my blog for Ontario Tourism, for obvious reasons, but Ontario Parks gets a one star rating from me. Their campgrounds are too popular, too expensive, and unregulated.

We hightailed it out of Ontario the next day. We had an invitation to stay at a cottage in Kipawa, Quebec, and it was just what we needed: two nights of cottage heaven before I headed north on a little solo ADV tour. 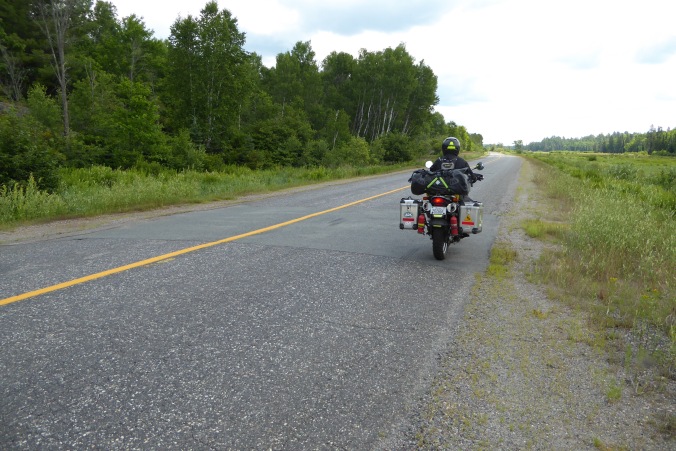 Have you had a bad experience at a campground? Let me know positive or negative by leaving a comment. I’m always happy to hear from my readers!