I grew up in Burlington, Ontario, two blocks from Lakeshore Boulevard, or as it was then called, Highway 2. On Saturdays, we would hop the Go bus and follow that road into Hamilton to B.J.’s Skateboard Park (I know, you couldn’t get away with that name these days), a concrete sea housed in the former Hamilton Spectator building. Those excursions into the neighbouring city for the day were the first tastes of freedom and independence granted by our parents. The return trip would be sleepy and pensive after full day of adrenaline, the coach bus a tiny lit capsule submerged in dark, shuttling back along Highway 2 with glimpses of Lake Ontario on the right between mansions. I struggled to stay awake so as not to miss my stop.

Later I discovered another kind of freedom. My girlfriend lived in Aldershot, our homes connected by a 10 kilometre stretch of Highway 2. Sometimes late at night, after my parents were asleep, I’d slip my dad’s Plymouth Fury II into neutral and push it out onto the road where they wouldn’t hear me start it, then drive the 20 minutes west to the goodies waiting there. If they ever heard me leave or coast in pre-dawn, they never let on.

My paper route was along Highway 2, a section that spanned from Appleby Line to the Skyway Plaza. Usually I’d cycle it, but sometimes I’d skateboard, and since the shoulder was still gravel, that meant dropping the skateboard and dashing, paperbag slung over my shoulder, 100 feet or so between oncoming cars before jumping off onto the shoulder at the last possible moment. I must have unnerved more than a few drivers but I knew what I was doing. I spent a lot of time on that road. On the bad winter days, I’d don my ski goggles to get the route done. Other days I’d stop at the creek that emptied into the lake and play or nap. One windy day some miscreant lifted the rock off my stack of papers and I returned to find them blown down Highway 2, stopping traffic as they pasted across windshields and lifted into the trees. When I phoned for more newspapers, my manager said I had to take some garbage bags and go clean up while I waited for the delivery.

When my older sister flew the coup, she lived first in Toronto North. I followed and we lived together for a few years. When I moved to London to go to university, Highway 2 was waiting for me in the form of Dundas Street. My sister moved to Dundas Street E in Toronto, so we were kind of still connected. In fact, before Highway 401, Highway 2 was the only continuous East-West artery running from Windsor to the Quebec border. I preferred it to the major highway and would take it when returning to Burlington for holidays when I could. Although slower, it was more scenic. Instead of a bus, now it was a tiny car that shuttled through the dark countryside. I wrote a poem about encountering deer one snowy Christmas Eve outside of Woodstock. And when I didn’t have my parents’ car, the Greyhound milk-run passed through sections of Highway 2 between London, Woodstock, Paris, Brantford, and into Burlington.

It seems that Highway 2 has been the major artery of my life connecting me with family and friends, so it’s not surprising that the morning after I got my motorcycle licence I hit the highway, so to speak, heading west along the 338 (formerly called Quebec Route 2), which turns into Highway 2 as it crosses the border. It’s a beautiful ride with the St. Lawrence River on one side and countryside on the other. It starts in Lancaster, then passes through Cornwall, Ingleside, Upper Canada Village (where the Black Creek Pioneer Village of elementary school field trips still exists), and quaint towns like Morrisburg, Prescott, and into downtown Brockville, which is actually very pretty and not at all like the commercial complex beside the 401. In fact, I used to associate Brockville with fast food joints and ubiquitous retail outlets until my motorcycle club had a ride that took us along Highway 2 into the old part of town. There you will find a marina and a park that has, among other attractions, a Canadair Sabre Golden Hawk of the Snowbirds squadron before it switched to the CT-114 Tutor. 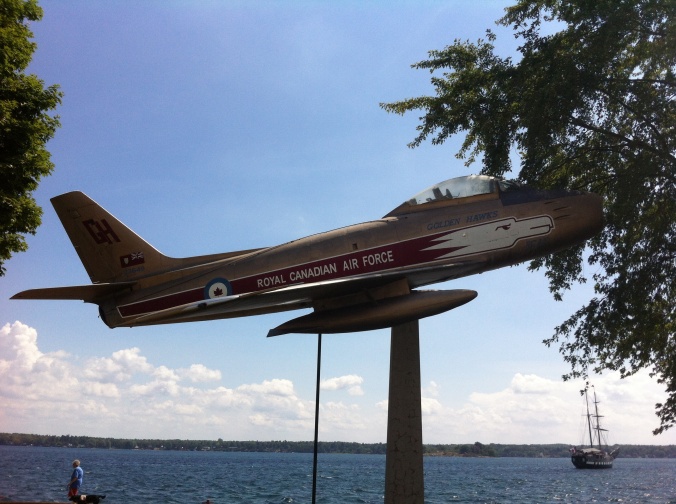 Sections of Highway 2 are based on trails that had been used by Indigenous peoples for hundreds of years before the colonization of Ontario, and that history is evident in places like Iroquois and Gananoque that is still passes through. In fact, a 1 km stretch at Gananoque is the only official stretch of Highway 2 remaining, according to Wikipedia. (In 1998, the highway was decommissioned and renamed, with that original section near Kingston, the King’s City, left as a token.) It connects the Thousand Islands Parkway (formerly the 2s) with the 401. If you take the Parkway (while the 2 swings north of the 401), you can pick up the 2 again at Gananoque and take it through Kingston, where it becomes Princess Street, then Napanee, Tyendinaga Mohawk Territory into Belleville and on to Trenton, Cobourg, and Port Hope. After that, the GTA behemoth  swallows it whole and spits it out again in Paris. If you hate studying early Canadian history from a textbook, just take a ride along Highway 2.

Why am I thinking of Highway 2 now? Well, as those of you who have been following my blog know, I rode Highway 2 recently in The States on my way back from Hampton Beach. Of course, it’s a different Highway 2 but was a familiar, reassuring signpost as the light faded on me in New Hampshire, still hundreds of miles from home. Yesterday I decided to make a trip to Burlington, Vermont, to buy a tank bag. Yes, we motorcyclists are willing to ride 360 kilometres for gear that’s not available in Canada. I still don’t have a GPS and didn’t want roaming charges on my phone so was looking for the easiest secondary highway that would get me there. I crossed the border at Rouses Point and picked up, you guessed it, Highway 2 which traverses Lake Champlain, slicing through North Hero, then South Hero, Sandbar State Park, taking me into North Burlington, then South Burlington and literally to the door of MotoVermont. The guys there were super nice and helpful, even helped me install the bag on my bike before I turned around and followed my favourite highway back home.

Crossing the Green Mountains with the sun setting over Lake Champlain to my left, I felt like a king.