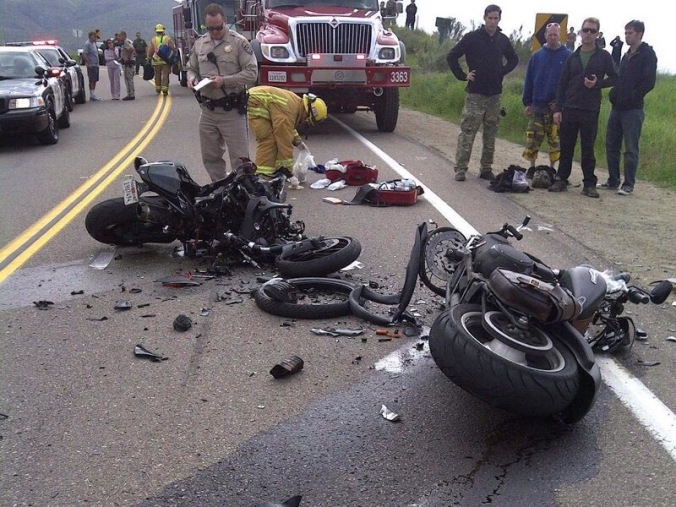 Let’s talk about fear. I believe there is good fear and bad fear. Good fear keeps you safe; bad fear can kill you.

On the second day of my training course, we were shown how to change gears. Two cones were placed at either end of the parking lot, about 100 metres between them, and we were to ride down the straight, change into second, then brake, change back into first, then do the U-turn and head back the other way. Sounds basic, I know, but when you’re learning . . .  Anyway, the tough bit wasn’t changing gears. As you might guess, it was that U-turn, especially with a chain-link fence bordering the turn. The instructor said “Don’t look at the fence.” This would cause target fixation and make you steer into it. But of course, soon after we starting looping, one of the students got going too fast in second, panicked, froze, tried to do the turn, looked at the fence, and drove into it. This is an example of bad fear.

The bike had cosmetic damage and the student went off to the hospital to have his shoulder checked. Turns out there was only minor damage there too but he had to pull out of our group and join another to complete the course. I asked after him later and the instructor said he was doing fine but “still thinking about it,” meaning he’d lost his confidence. Bad fear can hang around a long time and mess with your riding.

For this reason, I’ve never watched those motorcycle crash compilations on YouTube. I don’t want to get spooked, and when you are a new rider you have fledgling confidence that needs to be protected and nurtured. Once when I was going through a roundabout, I felt the back end slide. Fortunately, I wasn’t going very fast. I immediately straightened up the bike and slowed to the side of the circle. I was thinking about that slide when I leaned the bike over later in the ride on an off ramp. It took me a day or two to regain my confidence in leaning the bike again. Before I did my road test, I did a private lesson to prepare. That instructor said I was a “natural rider.” When I asked what that means he said I lean with the bike. Many new riders get “crossed-up,” meaning they lean opposite to the angle of the bike because they are scared.

But these incidents are minor. Low-side slides are the “easy” kind of accident to have. The bike slides out from under you and you and the bike slide it out. If you’ve got good gear on and don’t slide into traffic or an object, you can probably walk away from that accident with only a bruised ego. The real danger in riding are high-side accidents when you get launched over the bike, and the very real threat of landing in oncoming traffic or the back of a vehicle. Good fear helps avoid this by telling you when you’re pushing your limits. Jim Hyde of Rawhyde Adventure ures Off-Road Training says you should never ride at more than 80% of your limits. Leave a little buffer for the unexpected, he advises. Good fear will tell you when you’re approaching your limits.

That said, I believe it’s important to get outside your comfort zone from time to time. I’ve put over 4000 kilometres on my bike this summer riding with the club, but I was still spooked by the prospect of riding at night and in the rain.  My first solo ride—the morning after I got my licence—began in torrential rain and ended with several hours of night-riding at highway speed. When I pulled into the driveway, I was a different rider. That doesn’t mean I will henceforth be mindless of the risk of hydroplaning or reduced vision at night, but a little more confident in those situations. And confidence is a good thing. It keeps bad fear at bay.

Let’s admit it: some of the fun of riding comes from fear, that stomach-in-the-mouth feeling reminiscent of the fun-ride at the fair, but where the risk is real and not merely perceived. The goal is to ride that line of excitement but stay safe, or as safe as possible. Paramount is to have confidence in your bike. I knew my front tire was getting old so recently changed it. In the back of my mind was the thought of a blowout at highway speed or hydroplaning in rain. You also need to have confidence in your skills. This comes not just with road experience but targeted practice. When we were learning emergency braking, I got over-confident and grabbed rather than squeezed the front brake. Before I could say “Bob’s your uncle” the bike was under me with gas leaking onto the asphalt. (Fortunately it was the school’s bike which, by the looks of it, had been dropped more than a few times.) But I was still thinking of that incident when I did my closed circuit test and overshot the mark on the emergency brake test. I have since done some practice braking on my bike but need a partner to practice at higher speeds. That is on my list before the end of this season. Targeted practice develops muscle memory and muscle memory  supplants bad fear when there’s a real emergency.

But all of this is rather grim to think about on such a beautiful sunny Saturday. I think I’ll hop on my bike and go for a little ride. If we thought too much about fear, we’d never swing a leg over the saddle. A little thought, however, can help keep us safe.

Feel free to comment. The question in the title is genuine.