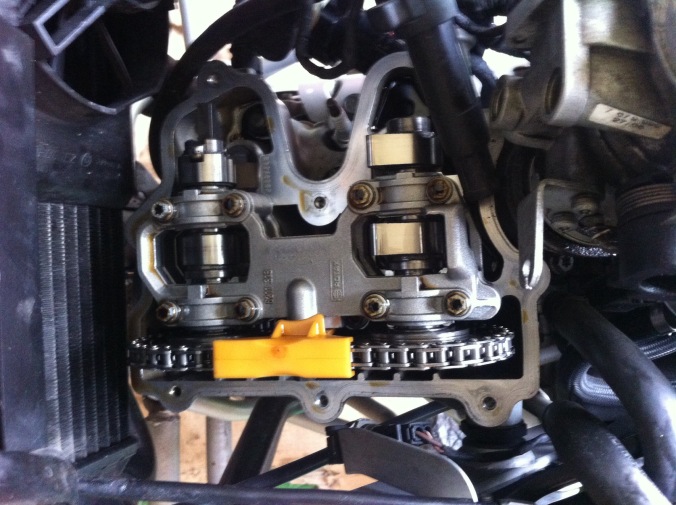 Last autumn when my bike was having trouble starting in the cold, I took it to BMW for a check-up. It was my first experience servicing the bike. When I explained the symptoms and said the mileage was 38,000 km., the response was, “So you’ve got your 40,000 km. tune-up coming. It’s probably the valves.”

Valves. Those things that let fuel in to and exhaust out of the combustion chamber. The very word sends shivers down the spine of most. We associate valves with $. Whatever the problem is with the valves—and I had no idea at the time what could be wrong with mine—we just know it’s going to  be expensive. Just to get at the damn things you have to rip half the engine apart. When I innocently inquired what the 40,000 km. tune-up would cost, I was told $500. I gulped. My mind is not so capable in math as it once was, but I immediately recognized that sum as about 1/10 the value of my bike! So this is the infamous BMW service costs, huh? My second mathematical thought was “I’ve got 2000 km. to figure out how to do it myself.”

So I hit the internet over the winter months and relied on my trusty Chain Gang to point me in the right direction. What I discovered is that when people say “valves,” what they mean is “valve clearances.” That’s the space between the valves and the cams that open and close the valves. Over time and use, these clearances either shrink or grow, and the valves go “out of spec,” meaning they are outside a recommended range. If the intake clearance is too big, the valve might not be completely closing upon combustion, or if it’s too small, the valve might not be letting in enough air-fuel mixture. Similarly, if the exhaust valves are out of spec, the chamber might not be sealing or exhausting completely, and the engine just doesn’t run right.

You adjust clearances on my bike by swapping out tiny shims located under the “follower,” a metal cup that rests on top of the valve. It’s actually the space between the follower and the cam we are adjusting, but we adjust it by either raising or lowering the follower by adding a bigger or smaller shim underneath. We are talking hundredths of a millimetre (.05 mm) here, so you need a good set of feeler gauges. A good calliper is also handy for checking the actual size of the shim you are removing.

If you find this rather boring, all you need to know for added dramatic tension is that if you mess up this job you can do some serious damage to your engine. That’s right: you have to put your engine at TDC (top dead centre) and remove the cams to get at the valves, and if you put the cams back even slightly wrong, you’re going to hear a great gnashing of metal when you try to start the engine again, which is the sound of your valves getting destroyed. So I wanted to get this right. No wonder it’s $500 just to check them!

On my bike, there are a few things I had to remove to get to the valves:

Now I was able to check the clearances and, as expected, one intake and one exhaust valve (there are two of each) were out of spec. I had mixed feelings about this. Part of me was secretly hoping they were all good and I would avoid having to remove the cams, but part of me was hoping I would find the source of my problem. Now at least I knew I had to pull the cams.

Next I had to do the maths and here’s a confession: before I became an English scholar, I failed out of Maths at U of T. Okay, I didn’t really fail out; I just realized at mid-term I was not going to excel in this field so did the Honourable Disappearance. This wasn’t linear algebra, but you do have to have a head for numbers and some spacial reasoning (e.g. If my clearance is 0.16 and my shim is 2.85 mm thick, how big a shim do I need to get roughly 0.07 mm clearance? Sometimes in life, you really do need to find x!).  For my bike, the specifications for the intake valve clearance are 0.03 to 0.11 mm. So I figured the ideal clearance would be halfway between the two, or 0.07. For the exhaust, the clearance has to be between 0.25 and 0.33 mm. I sharpened a pencil and got to work.

With the calculations done, the cams off, the shims out, I headed off to BMW to get my new shims. I showed the dude the sizes I need. “C’est quoi ça?” he asked. Apparently I had used a standard calliper to measure the thickness of the shims, so was working partly in metric and partly in imperial and the whole thing didn’t make sense. Doh! Like I said: mid-terms only.

Fortunately, because I’ve spent enough of my life doubling back and forth from home to auto parts stores, I had the foresight to bring the shims and my calculations, so the nice gentleman borrowed a calliper from service and measured them for me, redid my maths, and sold me the shims. By this time it was getting late and I had to be somewhere, so I had only enough time to get home, put the new shims in, put the cams back in place, replace the cam holder, measure the new clearances, and discover that while one was perfect, the other was worse than before! The nice gentleman at BMW had mismeasured one of my shims and sold me one that made the clearance worse. So the following day I had to remove the cover, holder, and cams again and essentially do two valve jobs. I was seriously beginning to wonder if I should have spent the $500.

What is particularly stressful about this job—aside from the risk of shifting the timing and destroying your engine—is that you’ll drop a screw or shim down in the engine. My shop manual suggests stuffing a rag or paper towels in the engine to catch any of the eight cam holder screws that might do just that. The YouTube videos I’d seen had alluded to that possibility in a vague sort of way that caused me considerable concern, such as “that would not be good,” or “you really don’t want that to happen,” and while I’m still unsure of what that would mean, I imagine it would cost me a lot of either time or money. So I worked carefully and slowly, and as I started each of the eight screws, I felt like I was a child playing Operation again. It was right at the height of this stage of the procedure that my wife walked out to the shed where I was working to ask me one of those questions all husbands love, like what shall we have for dinner, or would I take this call because somebody’s doing a survey.

In one YouTube video I’d seen, someone shows how you can use zip ties to fasten the cam chain to the sprockets. This way you ensure your cams don’t shift relative to the chain, messing up your timing and damaging your valves. But when I tried this, I couldn’t get the cams back in; the chain was too tight and prevented me from putting them back in their holders. So I held my breath and cut the ties. (I held the ties too, lest they fall into the engine.) Fortunately, I’d noted, even photographed, exactly where the hashmarks on the sprockets must be at TDC. A couple of rotations of the engine ensured the timing was spot on and everything was opening and closing as it should and there was no gnashing of metal. Still, once I’d put everything back together, I was a little nervous the first time I started the bike. It made one cough and fired, then hummed, as quietly as a thumper can hum.

All this was admittedly a few months ago, before I did my New Hampshire trip. I wanted to do this work obviously before that tour. Then just the other night I saw this video by Ari Henning from MC Garage on how to do your valves. He admits that the job gives most people the heebie-jeebies and is a major pain in the butt because of the risks involved. I admit, if I’d seen this video before doing the job, my confidence might have faltered. In the end, I think I did alright! Now I don’t have to think about my valves for another 40,000 km. and can put that $500 toward a new saddle next year.

Next up, prepping the bike for winter storage.