You’d think that my biggest frustration last week would have been when I accidentally broke my gas cap. It was the final fill-up before putting the bike into storage, more final than the fill-up which is part of my winterizing for storage. You see, I usually add the fuel stabilizer, then fill the tank, then go for a little ride to mix the stabilizer into the gas and work it down into the injectors, as well as heat the chain wax and oil. Then I top up again. It was on this final top up that I broke the cap. Jung would have something to say about this but I don’t, not about the breaking anyway. I’m going to write about the fixing.

Or you might think my biggest frustration would have been when I heard how much a replacement cap was going to cost. It’s a gas cap, right? How much can it cost? Okay, this is a BMW, so whatever figure you have in mind, triple it. Then triple it again. You’ll be pretty close. I wasn’t that surprised when the nice parts guy at BMW told me the amount and I said so. He missed the irony, but then maybe it was a language thing. Then he said, “You’re not surprised? Oh, then, actually it’s $ __________!” (tripled again). Big joke. (Laughing.) This time I missed the irony. Did I say he was a nice parts guy?

No, the biggest frustration of the week was in trying to remove one screw to replace this gas cap. After I had ordered it, received the call that it was in, gone and held my nose and paid for it, I figured the worst was over. But I was wrong.

The gas cap is all one unit, which is why it costs so much: the cap, the hinge, and the flange are all one piece, so while I just broke the hinge, I had to buy the whole shebang. The upside, or so I thought, was that swapping the old one out would be easy. Six screws. You undo the screws, you take the old unit off, you put the new unit on, you replace the screws. This is Motorcycle Mechanics 101. But what they don’t teach you in MM101 is that nothing, no job, never, ever, is simple.

Five screws came out like a charm. The sixth did not. At first I thought the screw must be stripped, so tried pulling up as I turned. Sometimes you can skip over the stripped thread and get the next one to catch and you are out of the woods. But I soon discovered that what the screw screws into was also spinning. Now normally when this happens, you simply get hold of the nut on the other side with another socket or wrench or, if necessary, vise-grips—whatever it takes—but you can usually stabilize one side and turn the other and, again, get out of the woods.

But what do you do when the fitting that the screw screws into is embedded in the side of your plastic gas tank and covered with a metal flange? You can’t get at what is spinning, not with a socket or a wrench or vise-grips or even pointed-nose pliers, not with a screwdriver (trying to jam it down and wedge it somehow enough for the screw to release), not with a pick, not with the bent-nose pliers you just bought hoping they might do, not with a chisel to cut off the damn thing since you are replacing it anyway, nope—not even the miracle tool advertised on late-night infomercials is going to get you out of these woods. “Are you fucking kidding me!” I bellowed at the top of my lungs, and since I was in my shed, the acoustics were such that the preschoolers across the park must have heard me. For sure my wife did, for she soon arrived, presenting herself and the dog as Cheering Party, offering tea and biscuits, and helpful advice like “Why don’t you phone Nice Parts Guy and ask if he has any ideas?” But I happen to know why Nice Parts Guy works in Parts and not Service. And I know that Service doesn’t give free advice; they say “Bring the bike in,” which in this case was not an option.

But then she said something brilliant, so brilliant that my grease-monkey brain had overlooked it. “Why don’t you take a break and look online?” Now it’s not like Siri is going to know how to remove a slipping screw from the side of the gas tank on an f650GS, but one of the “inmates” of The Chain Gang probably does! The Chain Gang—so-called because the 650 was the first chain-driven bike BMW made—is a user forum consisting of 11,493 members, all of whom own my bike or a close cousin. It is a veritable fount of knowledge on all things relating to my specific motorcycle. Whatever issue you might be having, someone else has already had it and solved it. What did people in my situation do before the internet? Oh yeah, they belonged to real user groups.

So I posted my problem and before the day was out another user replied, not with an answer but to say he’d encountered the same problem. Since his cap was merely rusted, not broken, he simply replaced the other five screws and lived with it. He said he was curious too if anyone had an answer. Then someone did. He suggested drilling off the head of the screw. My concern with this plan is that I’d still be left with now a head-less screw seized inside a still-spinning fitting, so it wouldn’t solve the problem. A little back-and-forth and soon we, yes now “we” because that’s the nature of a bike forum, had another plan: I could use a drill, not to drill the head off but burn the fitting out of its socket. With the other five screws out, I knew there was enough play to get my fingers under the ring and pull as I spun the screw and fitting. With time and patience, eventually the plastic would give and the fitting would release. Then I could grip the fitting with some pliers (or my teeth, perhaps, by that point might be preferable) and unscrew the screw, then glue the fitting back into the empty socket. That was the plan.

But first I needed this tool. All new jobs require one new tool.

This allowed me to put any of my 3/8″ sockets on my cordless drill. I put the torx socket on, drilled (counter-clockwise) and pulled and in no time the fitting was out. Here is what it looks like out, next to the screws.

It’s brass and the rounded end goes down into the plastic. It is “gripped” by surrounding plastic which had deteriorated and given way. The top is squared.

Here is a photo of the emptied cavity with the remaining five fittings. 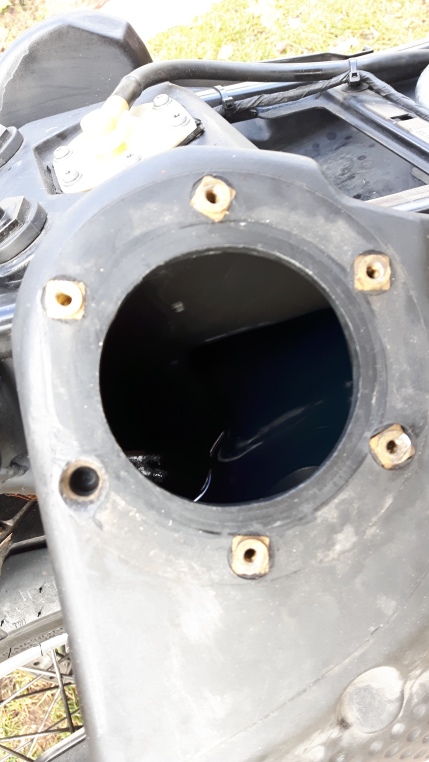 Yes, that is gasoline sloshing around inside.

The next part of the job was glueing the fitting back in. I decided to use epoxy glue since I’ve had good luck with it on plastic before. This is where I get to play artist, mixing the epoxy and hardener on my palette.

I’m sure others have their own methods for mixing epoxy but I use waxed paper and a nail. This particular brand fortunately ended up the exact shade of grey I needed. 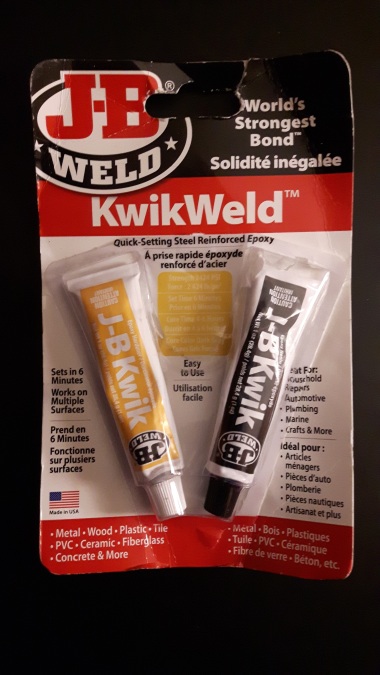 The first time I tried, I made the mistake of putting glue in the cavity and then trying to press the fitting back in, thinking the glue would squirt up into the vacant space at the sides and surround the fitting. But it didn’t, perhaps it was because it was 1 degree Celsius out and the epoxy was stiff, but the fitting sat too high. So I quickly cleaned the fitting and cavity before anything set and started again. The second time I put epoxy just around the “neck” of the fitting and none in the cavity. I guessed the quantity just right. The fitting bottomed out and the epoxy came just flush. I had just a little excess to clean away. Then since it was cold, I used a hairdryer to help it set. All in all, it looked pretty good.

After that, it was just a “simple” matter of replacing the rubber seal, the metal flange, the new gas cap unit, and all six screws. I did not tighten the new one but will wait until the spring when I’m confident everything has set hard before completely tightening it. I’m now thinking I might put some anti-seize grease on it, just in case I have to remove it again in the future. That particular fitting seems to be especially tight.

I’m no expert but I’ve done quite a lot of mechanical work, including changing a clutch on my car this past summer. But this single screw sure had me stumped! It’s funny how sometimes the seemingly simplest jobs can be the hardest. Most jobs involve approximately 25% familiarity with tools, 25% understanding of basic mechanics, and 50% problem-solving. It’s one unforeseen snag after another, some bigger than others. You have to keep your cool, take your time, seek advice where you can, and persist. It also helps to have a partner who injects a little something foreign into the mix when needed.

Thanks to my wife Marilyn, and Phil (aka backonthesaddle) at The Chain Gang for getting me over some hurdles to the finish. The bike is now ready to ride first warm weather next spring.