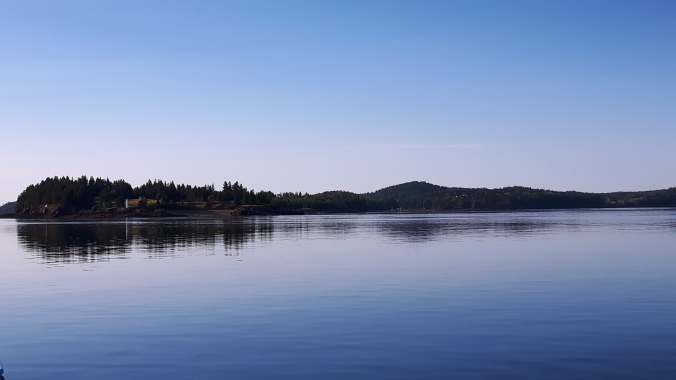 After a stressful day of mechanical problems and then almost missing the ferry, I was happy to be on the ferry munching my fish & chips. This photo was taken off the bow and looks toward the campground, which is right on the southern tip of the island. It was a short crossing and soon we were landing.

I came to Deer Island on the suggestion of a retired colleague who teaches sea kayaking at Seascape Kayak Adventures, one of the small businesses on the island. It’s situated in the Bay of Fundy between Maine and the New Brunswick mainland. (Not to be confused with Deer Isle, which is in Maine.) It’s officially in New Brunswick. The adjacent island, Campobello Island, is famous for being the summer vacation spot of Franklin Roosevelt, and his estate is still open to the public to view.

But while Campobello is touristy, Deer Island is rustic! Remote. There’s no potable water at the campground, and they don’t accept credit or debit, so make sure you don’t make my mistake and arrive with little Canadian cash and have to pay mostly in USF. Ugh! I was mad about that one because I make it a practice to carry cash when travelling, but stopping at the bank was literally the last thing on my To Do list and I just didn’t get to it before crossing the border.

I was tired, and the ramp up from the shoreline is loose stones, but I managed them no problem. What I didn’t manage so well was the final turn of the day. I don’t like parking the bike facing in at a site because then I know I have to turn it around before I leave in the morning, so I always try to do that U-turn before parking the bike. I did the turn okay, but lost my concentration at the last moment on the uneven ground literally as I put my foot down. It was a fitting end to a long, difficult day.

It looks worse than it was. It was a gentle roll onto its side on grass. I removed the top bags and easily lifted the bike back up, and soon everything was right again in the world.

After two long days in the saddle, the next day was a planned day of rest, so I spent it putzing around the island and checking out The Old Sow. The Old Sow is the largest natural whirlpool in the Western Hemisphere. It forms just offshore from the campground, the product of three water systems converging in one spot. The waters rise about 10 feet and there are some serious currents happening in these waters. It’s called the Old Sow because the water will actually make a sucking sound. I went down at high tide, and while there was some swirling water, I didn’t see a whirlpool. I heard from someone later that the best time is actually three hours before high tide.

The island is quaint and fun to ride with the hilly twists and turns, but there are parts like this one where something has been left to rot. No one’s going to take care of this mess, it seems. (Yes that is a collapsed ramp in the foreground.)

Yet despite these eyesores, the island has a charm about it. It’s very quiet. You can sit and be still and listen to nothing but birds, and that is something increasingly rare these days. There’s one restaurant, and no ATM machine, or so I was told, only to come upon one at the general store during my exploring. Oh, my chance to get some Canadian cash, I thought, but discovered there was no money in it because the person who tends it (same person who runs the restaurant) has been too busy to fill it. That’s kind of how life is like on Deer Island. It’s pretty in the summer, but I imagine it’s pretty brutal in the wintertime.

I was supposed to meet up with my ex-colleague and friends for dinner, but there was a problem with the ferries that delayed their return from a kayak excursion, so it was curried lentils for dinner.

Not so swanky. I didn’t get many more photos of the island because I was mostly riding it. But this shot of the eastern shore at dawn will give you a good idea of how peaceful it is out there. I’m glad I visited and will go again when I’m out that way. There’s nothing quite like it. 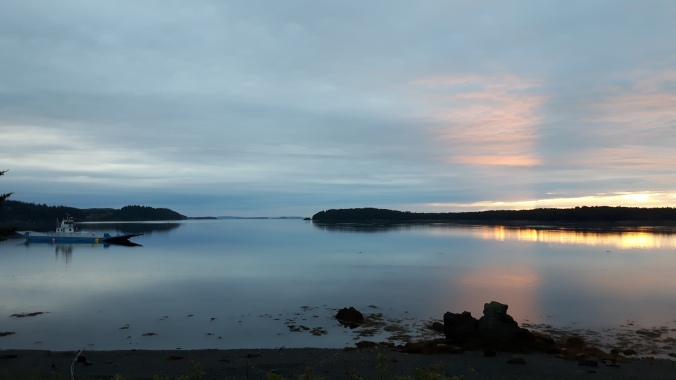