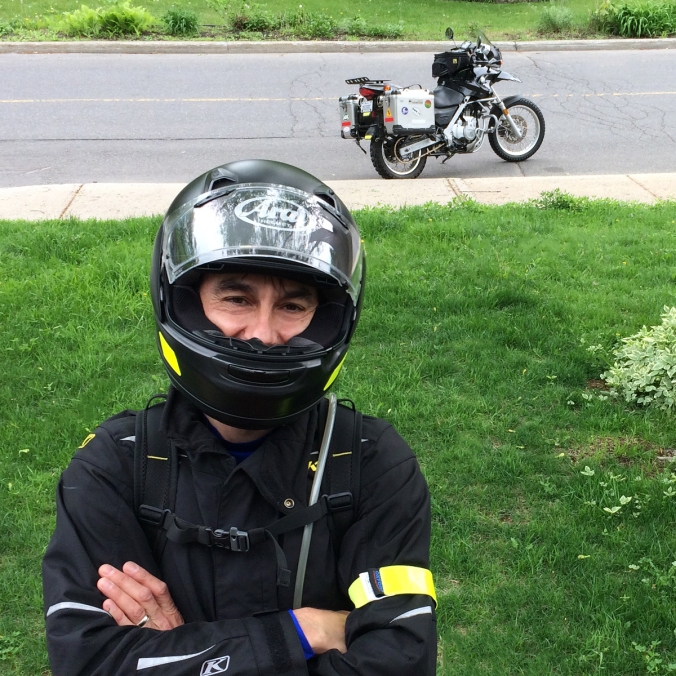 Hindsight may be 20-20 but nobody can predict the future. This Covid-19 has thrown us all for a loop, and we still don’t know how the story will end. It’s hard to make plans for the summer when everything is so up in the air, but I am a Gen-Xer. We grew up with the threat of nuclear war hanging over our heads and still managed to make it to school each day, even hold a few tentative plans for the near future. A little pandemic isn’t going to stop me planning the riding season set to begin.

Obviously, much of this is pending how the pandemic plays out, so I’ve made some educated guesses. The regions are starting to open now and the stores and schools will be in a few weeks. It looks like we will be starting to loosen social distancing restrictions in the near future, although I think everyone is going to be wary of close proximity in confined spaces for some time to come.

For that reason, I think most of my riding this summer will be either solo or with a few riding buddies, cognizant of minimizing contact and risk. I’m okay with that. Riding is already a pretty solitary activity even when shared. I love solo touring, but as I said in my last post, I love club riding too. Here are my tentative plans for this summer amid this weird year so far.

The first little tour I’m going to do is down into Vermont and New Hampshire for a few nights once the border re-opens. Last year I rode the Puppy Dog Route on my own in June and it was just the thing to recenter after being stretched out of shape by 100 students, each wanting a piece of me. This year I will try the Hamster Ride, which is the same sort of thing as Puppy Dog but in New Hampshire instead of Vermont. It’s a series of dirt roads traversing a good part of the state up to the Canadian Border. I love dirt roads, state parks, the White Mountains, the Green Mountains, and the secondary highways of the northeastern states. I think Bigby and I will attempt Mount Washington while passing nearby, but I won’t be putting any “This bike climbed Mount Washington” sticker on my pannier. That’s boasting. Besides, it makes you question the reliability of any vehicle that feels the need to advertise the accomplishment. 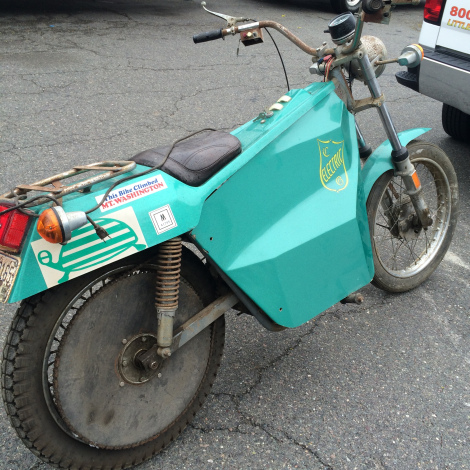 I don’t have any other small tours planned, but Marilyn and I will be doing some day trips together. To beat cabin fever, we’ve done a few rides along the river these past few weeks. We go in the late afternoon and it’s a slow, easy ride west as the sun sparkles off the water. Marilyn says she thinks she’s caught the motorcycle bug. The other day while doing some routine maintenance on the bike, I noticed my rear brake pads were finished, so I’m waiting on new pads to arrive in the mail. Now she’s asking, “When are those pads arriving because I want to go for another ride?” Finally, she might be getting the appeal, and as long as we don’t get caught in a rainstorm, I think I’ll be able to cultivate that interest into a simmering passion. We will pack day lunches and head off on our own small adventures.

But The Big One, the tour I’m most looking forward to, is the cross-country one I’ve wanted to do since I was 19. I thought it might be this summer, but then our dog got sick, so it was put on hold; then sadly our dog died, so the possibility was back on; but then Covid hit, so now I’m not sure. But all going well, I’ll be heading across Canada sometime in July. I’ll head up toward Ottawa on Highway 417 which turns into the 17 after Ottawa, then I’ll just keep going, westward, through Chalk River, Mattawa, North Bay, Sudbury, Thunder Bay, and just keep going, as far as Bigby will take me. I’ve never driven across the country, so this is going to be a real discovery for me of the country I grew up in and call home. 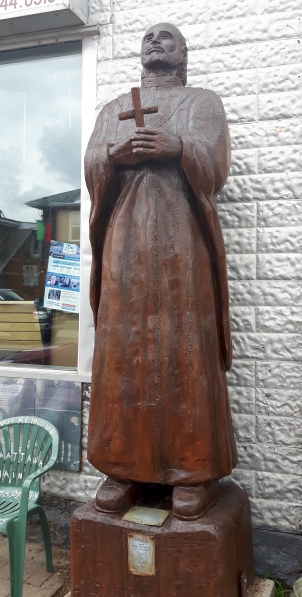 Mattawa, ON., Gateway to the West

The plan is to meet Marilyn somewhere out west (she will fly) and we’ll visit her sister-in-law in Washington State. I may be tempted to ride a portion of Highway 101, the Pacific Coast Highway, while I’m close, and that’s why I want to do this in July, although the heat will be worst then; I want to have the flexibility that no fixed deadline provides, and I have to be back to work in August. Then I’m going to come back through The United States, checking out their national parks. I’ve never seen the midwest, or The Grand Canyon, or Yosemite, or much of The States to be honest. So I’ll be discovering that country too, camping all along the way.

I’m considering doing some of this on dirt, either some BDR sections (Backcountry Discovery Routes) or a part of the TAT (Trans America Trail). There’s a lot to plan, but now that my work is done, I have the time to start.

I won’t be going on any tours with the club like I did last year, but I’ll do some day rides in the Montreal area. These are easy rides of 350 km/day or so into the surrounding regions with a few forays across the border. See my last post on the benefits of club riding. This year will be muted by social distancing, but motorcyclists are used to managing risk.

I’ve decided to lead a couple of dirt rides for the club. We are primarily an asphalt club but there are now a few members with ADV or ADV-styled bikes and even some cruisers who aren’t afraid of dirt. Often on club rides, I’d see an interesting dirt road leading off into the woods and I’d be dying to go exploring. I’m betting there are a few others who feel the same. Ideally, I’d like to offer these as an optional portion of a larger club ride, with a plan to meet the group for lunch. I’m going to call these 50/50 rides (50% road, 50% dirt). With my new Cardo PacTalk comm unit, club riding will be a whole new experience for me this year. 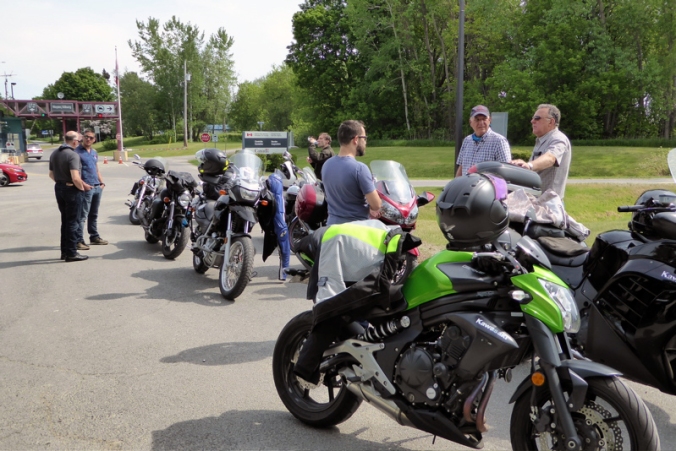 I cannot tell a lie. What I am most looking forward to this season is developing my off-road skills. It’s been a few years now since I took some beginner courses to get me started and I’m ready to take my skills to the next level. I’ve purchased Chris Birch’s Say No to Slow set of instructional videos on Vimeo and have been watching them while I wait for the brake pads to arrive. I can’t wait to get out there and try some of what Chris is saying.

Why pay for something that is free on YouTube, you ask? In a previous post, I listed some of my favourite online teaching channels, and I still think those are excellent resources. But Chris goes into a lot more detail than most of those, and more importantly, he covers the boring fundamentals that those channels can’t afford or choose not to cover, and that’s what I need. Yeah, everybody wants to learn how to wheelie and drift (but not at the same time!), but I’m more interested in things like bike set-up, foot placement, body positioning, and cornering in the dirt, which are covered in the video series. I was surprised that the entire set of 12 videos is under $50 Canadian. I don’t have any affiliation with the production team. I just know good pedagogy when I see it and what I need now most is guided self-practice.

There is a sandpit just over the border in Ontario I practice at, and a network of trails and Class 4 roads not much further starting in Hawkesbury. My bike has a new rear shock—one capable of some serious dirt—and Ricor Intiminator valves in the front forks,  so the suspension has just been upgraded to dirt-worthy. It’s got good crash protection, as do I with my new Leatt STX neck brace. We’re ready.

The STX is for street and adventure riding. The wider scapula wings do not conflict with your back protector and you do not need integrated body armour.

Are you ready? It’s been a crappy spring for weather but the double-digits are just around the corner. Is your bike ready? I’ll be writing an article for my new paying gig, Riders Plus, on how to get started maintaining your bike. So get your tools out and let’s change the coolant, the brake fluid, the oil, check your tire pressures, and get ready for a new season. It is the best of times, it is the worst of times. Riding makes everything a whole lot better, especially when shared in the company of friends. If you want to escape the bad news for a day or more, there’s nothing quite like a fast motorcycle to help you do it.