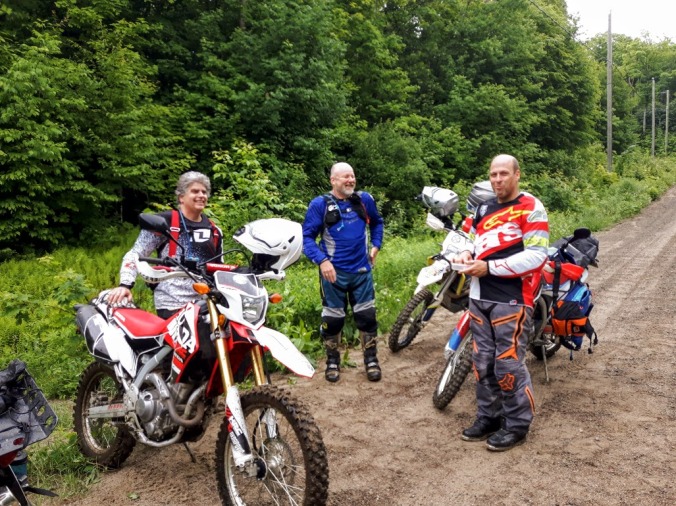 There hasn’t been a lot to write about this summer. Covid-19 has gutted two of my major plans: to ride across Canada, and to do the Hamster Trail in New Hampshire. The most exciting thing of the season so far has been a ride with The Awesome Players.

I started watching their YouTube videos years ago. I have to admit I didn’t get it at first. Why are these guys taking their huge bikes where they’re clearly not meant to go and bashing the hell out of them? Why are they riding beyond their skill set? Then I started doing it myself. It starts with riding dirt roads and easy trails, but soon enough you arrive at a section or a hill climb that is clearly beyond your or your bike’s abilities. Do you turn around? Hell no! The challenge is too alluring and the next thing you know you’re bashing the hell out of your bike too.

I started emailing with Riley, one of The Players, a few years ago. He graciously sent me the location of their famous sandpit. Okay, it’s not “their” pit, but I would understand if he preferred to keep it a secret. These off-road spaces are becoming increasingly rare, and the more activity there is around a site, the more chance the company who owns it will close it off. So I appreciated the tip. He added, “Let me know if you’re going out there sometime and maybe I’ll tag along.” Well it has taken a few years for me to act on that invitation, but we finally rode together a few weeks ago, only it was me tagging along.

I met Riley, Marc, and Frédéric at the A & W in Hawkesbury, where most of their videos begin. We decided to head up Scotch Road and I was doing fine until we got to the water crossing. It was here that I discovered that there is very little traction left in my rear Shinko 805. I got halfway across, hit a rock, lost all momentum, and couldn’t get started again, even after hopping off the bike. With a little help from Marc, I got across and up the far bank. That was only an indication of worse to come!

These guys have been riding that area a lot longer than me and I found myself on trails I would never attempt on my own. I was up for the challenge, but was dropping my bike a lot! Fortunately, it was all captured on camera so I will eat my humble pie when that video comes out. What I was quickly discovering was that my bike really isn’t cut out for this kind of riding. In my street club, I have the little bike, but here Bigby was the heaviest at 400 lbs. (The others were on CRF 250 Rallies and a Husky 701, both about 100 lbs lighter.) The clearance on my bike is crappy at about 6 inches, partly because of the BMW engine cage that loses me an inch. But mostly it was that rear tire and my skills that were letting me down, literally. I don’t know how many times I dropped the bike.

But it wasn’t all bad. As the day progressed, we rode some easier trails and I wasn’t struggling as much. I also did a couple of pretty good rocky hill climbs to get to those trails and was proud of that. Riley gave me a little coaching on clutch control that helped. The day ended as it began, with us blasting down Scotch Road, only this time something weird was happening with the handling of the bike. When we arrived back in Hawkesbury, I saw oil under my bike and discovered that my new shock had sprung a leak. To make matters worse, my mudguard was also flopping around because it had cracked during the day.

I limped home and am in the process of repairing the bike. Stadium Suspensions have redesigned the shock, and I’ve glued the mudguard using the superglue bicarb method. I’ll be back on the road soon, and I probably mean literally the road. I’ve come to the conclusion that this old bike just isn’t cut out for hard off-roading. It’s an excellent adventure bike with light off-road capability. I love it for all the same reasons I bought it in the first place; it is a reliable bike that can take me (almost) anywhere, yet small enough to lift on my own should I drop it out in the middle of nowhere. I love how it is balanced and how it handles. It’s an excellent small adventure bike.

But if I’m serious about doing off-roading, I’m going to have to get a smaller bike and save Bigby for what he’s designed for. I guess this is the normal trajectory of an Awesome Player, since most started on big bikes and have gravitated toward smaller ones over the years. Learning skills on a small bike is easier and safer, with less damage to bike or body when things go wrong. Hopefully I’ll soon be back out with The Awesome Players but with a bike more suited for the terrain.